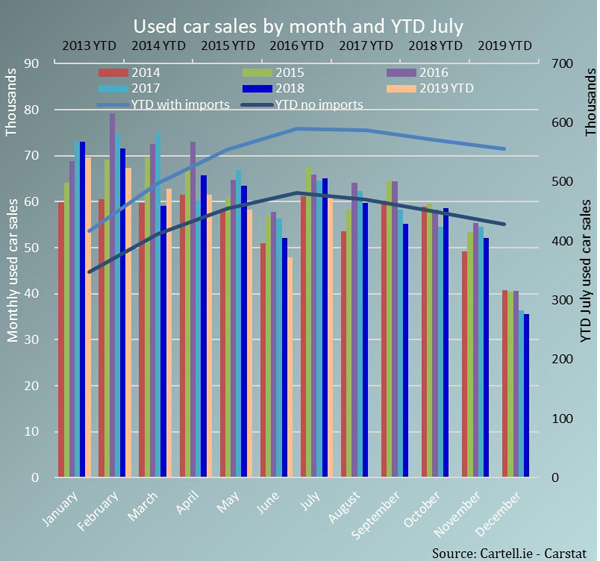 A market report from cartell.ie produced in conjunction with BAC Auto Consulting suggests that the volume of used cars being imported from the UK is having an impact on the resale market for Irish used cars.

Used car sales have fallen every month this year over the same period in 2018 except for March. Overall used car sales for the first seven months of 2019 are down 4.2% including imports and down 4.4% excluding imports. The report suggests that the fall in imports compared to 2018 is a result of UK businesses stockpiling in the run-up to the original March 2019 Brexit date. This boosted UK GDP growth and in turn strengthened the pound against the euro making the value of imports less appealing.

The report identifies that total used car imports hit a record high 22.9% of all used car sales to the end of July 2019. It says that this increase of imports impacting used car sales is expected to continue whilst the UK border stays open and the euro remains strong against the pound. It notes that while the issue of an open or closed border between Ireland and the UK is seen as the biggest issue facing Brexit, a closed border could actually be a good thing for parts of Ireland’s automotive industry.

Another factor is the introduction of the Real Driving Emissions (RDE) test, which, the report says could see some UK dealers and manufacturers pushing new car sales in the run-up to September to clear out stock before the new regulations are mandated and to recover some lost sales.