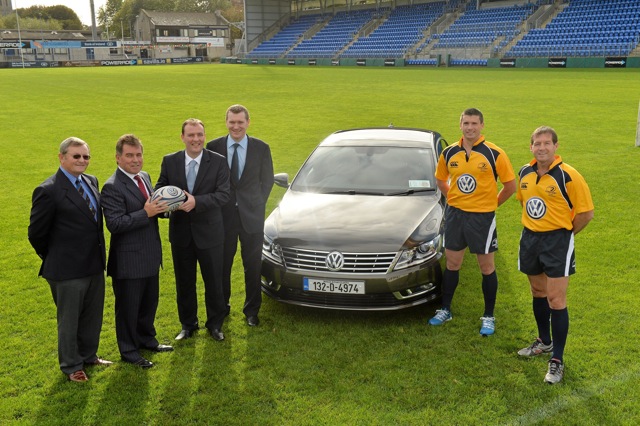 Volkswagen has been sponsors of Leinster Rugby for the past four seasons and has extended that commitment to incorporate the Leinster Rugby Referees for the next three years.
Speaking of the partnership, Paul Burke, Operations Director for Volkswagen Group Ireland said: “We are delighted to support Leinster Referees Association. At Volkswagen we are already strong supporters of Leinster Rugby and this partnership will further our involvement and enhance the partnership for both organisations.”
From humble beginnings in 1902 the Association is now in its 111th season. Total membership has grown to approximately 350, including administrative Committee members, Assessors and approximately 250 active members. Throughout the season Association members provide officials to in excess of 4,200 games throughout the province at all levels including Youths, Schools, Junior and Senior adult Rugby.
Peter Donnelly, President of Leinster Rugby Referees, said: “As with all sports – amateur and professional – sponsorship remains a vital component of our survival. The LRR membership is entirely voluntary and operates very much on the principles of amateurism. Members give of the services voluntarily throughout the season. The Association prides itself by the uniformity of its member dress code and sponsorship is vital to member adherence.
“We are delighted to have obtained the very generous support of such a high profile and successful company as Volkswagen. Their long-term backing will enable the Association to maintain a consistent, high standard and professional image through all its members whilst on official duties – an objective consistent with the history and reputation of VW itself.”
The Association also provides officials in support of the All Ireland League and is fortunate to have in its ranks a number of individuals who have achieved greater honours at European Competition and International level, in both the Northern & Southern hemispheres.
The announcement is further good news for the association who are extremely proud of the achievements of members Alain Rolland, who has refereed in three Rugby World Cups and one Rugby World Cup final and more recently Helen O’Reilly, who refereed the England v France women’s international in Twickenham.