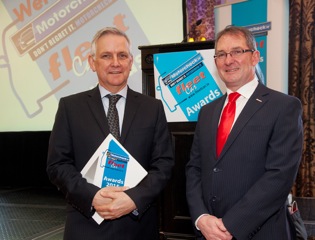 Some were claiming titles for the first time, while others celebrated four-in-a-row successes. The broadening scope of the Irish fleet car market was reflected in a successful 2015 Motorcheck.ie Fleet Car Awards & Forum, which saw nine awards presented to successful candidates.

Held in the beautiful and historic location of Dublin’s Clontarf Castle, this was the fourth year of the awards which acknowledge those manufacturers and vehicles achieving excellence in the corporate / fleet car market. Organised by Fleet Car Magazine in association with primary sponsor Motorcheck.ie, the event was also supported by the Health & Safety Authority, Enterprise Rent-a-Car, Merlin Car Auctions and Goodyear Dunlop.

Before the announcing of awards, the invited guests, representing all facets of the motor industry, heard topical and relevant presentations from industry specialists. Grainne Hennessy, Head of Procurement and SRM at Permanent TSB had all the representatives from the motor manufacturers on the edge of their seats as she gave a presentation on ‘Selling Fleet Solutions to Corporates’. The Director General of SIMI, Alan Nolan’s presentation was entitled ‘A View from the Recovery Ward’ – an insight into what the Irish car industry has gone through in recent years and where it is heading. John Courage, Head of Sales of event sponsors Motorcheck.ie gave an interesting insight into the challenges involved in predicting future residual values of cars in Ireland, and what plans Motorcheck has in this respect.

Two new categories were presented this year to reflect the growing importance of alternative fuel vehicles within the fleet sector. The Irish Green Fleet Car of the Year – Electric was presented to the Nissan Leaf. It was lauded for its practicality, drivability and Nissan’s fleet support. “Good power and smooth suspension’, ’Ride, handling and acceleration are all impressive’ and ‘This car really surprised. Very well appointed, and excellent drive’ were some of the feedback comments from judges. 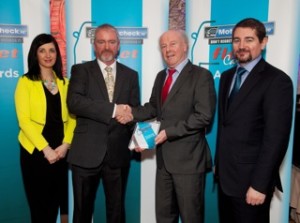 The Lexus IS300h was the winner of the Irish Green Car of the Year – Hybrid.  ‘A very well executed project and a very good balance between electric and petrol-power.’ noted one judge while another said ‘The Lexus represents hybrid motoring without compromise’. 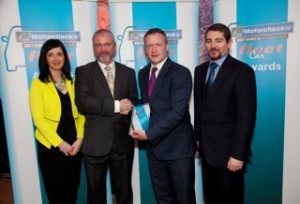 A familiar look to the Executive / Luxury category where once again the BMW 5-Series was victorious. Uniquely it has won this award on every occasion since the Motorcheck.ie Fleet Car Awards were inaugurated in 2012. ‘The 5-Series remains the benchmark for ride and handling in the category. Extremely well balanced and poised yet offers excellent comfort’ said one judge, while the brand’s dedicated fleet strategy was also praised. 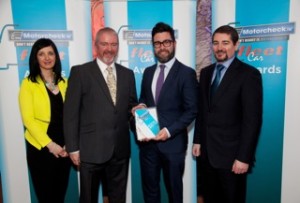 The Skoda Octavia Combi claimed the Estate category winning high praise from the judges for its practical layout. ‘One of the most complete estates in any segment’ and ‘The boot space and rear legroom is unbelievable. Ideal for the sales rep and for the family at weekends’ was just some of the feedback from judges. 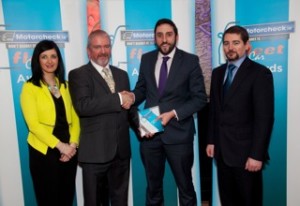 Marking its first success in the Motorcheck.ie Fleet Car Awards was the Honda CR-V which was successful in the Crossover category. Judges praised its new 1.6 diesel engine as well as the brand’s approach to growing fleet sales.  ‘Honda has clearly given a lot of thought to its fleet policy and how to grow in this area’ said one judge while another commented ‘Well focused on costs and efficiency. Good service back-up’. 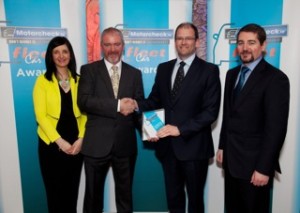 The Volvo V40 won the C-Segment Premium category. The company’s proactive fleet strategy was acknowledged, and the V40 won praise for its ergonomics and new diesel engines. ‘Fuel efficient, quiet and with surprisingly good performance, the latest generation of Volvo engines are a big step forward’ was a typical comment from the judging panel. 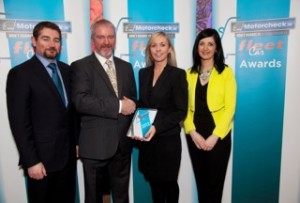 The D-Segment Premium award went to another new winner – the latest generation Mercedes-Benz C-Class.  ‘A much more modern and better car than the one it replaces. Overall, a better package than its direct rivals and its modern exterior and interior give it an edge’ noted one judge, while competitive pricing and expected strong residual were also noted in its favour. 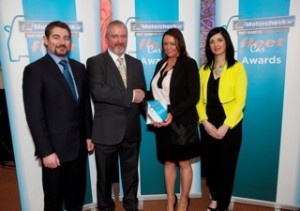 The new Ford Focus claimed success in the highly competitive C-Segment category, its first time to win this award. Judges were unanimous in their praise for its driving dynamics with comments like ‘The Focus remains the benchmark for handling and driving enjoyment’ and ‘Steering is remarkably responsive’. It’s ergonomics and Ford’s strong fleet presence in Ireland were other positives. 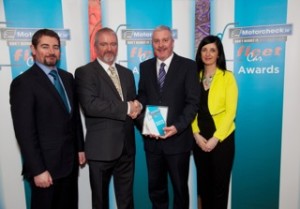 Finally the latest generation Volkswagen Passat took the prize for best D-Segment Fleet Car for 2015. Its upmarket design impressed the judging panel.  ‘Modern and very impressive car with the right degree of edgy design’ said one, while another added ‘Typical VW quality with some nice new touches inside. Space in cabin and boot is top class’. 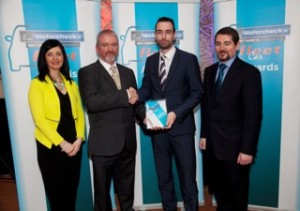 Cathal Doyle, Deputy Editor of Fleet Car commented: ‘The range of winners in the 2015 Motorcheck.ie Fleet Car Awards truly reflects the diverse company and fleet car sector of today. The fleet market is more important than it has ever been, and it’s encouraging to see so many manufacturers recognising this and putting proactive fleet policies in place. Well done to all the winners and commiserations to those who were not successful today.’

Michael Rochford, Managing Director of Motorcheck said: “The Motorcheck.ie Fleet Car Awards are a great way for us to acknowledge the importance that the fleet sector has to the Motor Trade as a whole. We are delighted to be involved as the title sponsor for the fourth year running in what has proved to be a very successful and productive event. We send our congratulations to all of the winners and our thanks to all who attended and participated.”