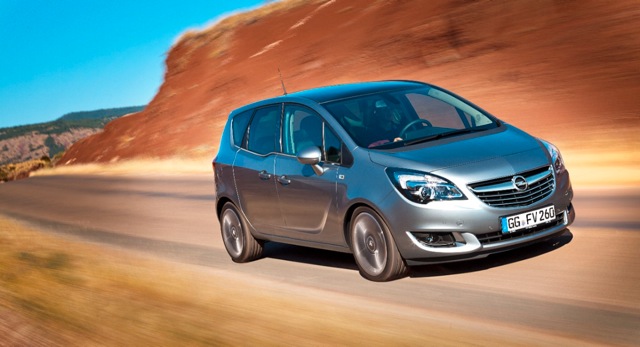 Starting with the class leading Insignia which has just made its debut. As Opel’s flagship model, the new Insignia has broken the mould in engineering efficiency, aerodynamics and technology. With its sleeker new design, the Insignia is now the most streamlined hatchback in the world and definitively embodies Opel’s philosophy where “sculptural artistry meets German precision”.
Featuring a brand new the 2.0 CDTi (140hp) boasting an impressive torque of 350Nm (370Nm in overboost), this impressive new diesel engine emits just 99g/km CO2, making it the most fuel efficient engine in its class, qualifying for tax band A2 (€180).
A completely new multimedia system called IntelliLink is launched in Insignia which integrates the driver’s smartphone so that the user is always connected to their world. With two visual modes (8-inch touchscreen and 4-inch instrument panel display) and four control modes (touchscreen, voice control, haptic feedback touchpad and steering wheel controls), operating IntelliLink is simple and intuitive.
Joining the new model line-up, the ergonomic champion- the Meriva will go on sale in Ireland next year with a new look, the new class-leading 1.6CDTi diesel engine and IntelliLink with a seven inch colour touch screen. This engine is the quietest in its class and features 136hp that delivers 320 Nm of maximum torque. Meanwhile it consumes just 4.4 liters per 100 kilometres and emits 116gm/Km of CO2.This new diesel engine has debuted in the Zafira Tourer and is expected to be introduced in the Astra Saloon later in 2014.

The Opel ADAM will also receive a brand new 1.0 litre direct injection engine that represents a new benchmark for refinement in three-cylinder power units. The 1.0 petrol turbo engine develops 115hp, and delivers high low-end torque of 166 Nm from 1,800 to 4,700 rpm – more torque throughout the operating range than equally powerful, higher displacement engines, making ADAM the Pocket Rocket the City Car Segment. Fuel efficiency is improved by 20 per cent compared to Opel’s current 1.4-litre naturally aspirated power unit. This engine delivers low noise, vibration and harshness (NVH) characteristics which are superior to many four cylinder units – meaning that driving on motorways will be a quiet, enjoyable experience.

These new engines are part of Opel’s powertrain offensive, which will see three entirely new engine families introduced across the range of models through to 2016 including new petrol engines. They extend to 13 different engine derivatives with a host of new transmissions, and bring cutting-edge technologies and class-leading performance to a wide range of Opel’s models.

This year Opel Ireland are also introducing a new trim on the popular Corsa. The ‘Excite’ five-door model will come with Air Conditioning, Bluetooth Mobile Phone System, CD and Stereo system with USB Plug-In, Trip Computer and new 16” Alloy Wheels all as standard. The trim will also feature unique seat trims and will feature a very competitive price.

In addition to launching new models and engines, Opel Ireland has also launched its own Personal Contract Plan (PCP) finance option called Opel Choices Finance. Under this finance agreement, you choose your Opel and deposit from as little as 7% of the Retail Price of an Opel. Opel then gives you a GuaranteedMinimum Future Value at the end of the term and you then have three options to; Take it and pay the balance. Leave it and hand your Opel back with no penalties or Change it for a brand new Opel.