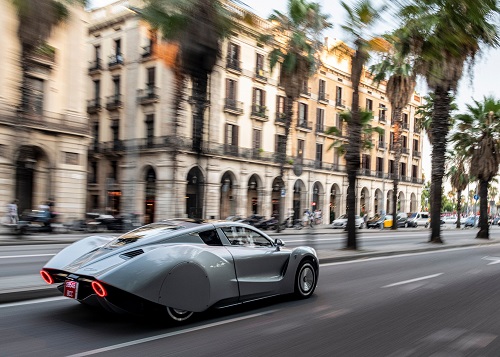 The Hispano Suiza Carmen has made its global dynamic debut on the streets of Barcelona, its home city. Cruising the famous city streets and coastal roads, was piloted by a selection of drivers, including Sergio Martinez Campos, the brand’s CEO and Lluc Martí, Technical Director of Carmen.

Since the global premiere of the fully-electric hyperlux grand tourer at the Geneva Motor Show, the development team has worked on a comprehensive testing and refinement programme. The car now has an entirely new suspension system, alongside a series of weight-reduction and rigidity enhancements. The chassis development also includes crash structure optimisation with extensive use of carbon fibre enhancing performance, while shedding weight.

The next stage of the Carmen’s journey intensifies vehicle speed and dynamism to realise the car’s full – 1,019 PS – potential. The hyperlux grand tourer will first conduct a series of on-road tests in the north of Catalonia, before moving to the world-famous Ascari racing circuit for high-speed testing and handling development.

Owned by the fourth generation of the Suqué Mateu family, Hispano Suiza built more than 12,000 luxury performance cars and 50,000 aeroplane engines between 1904 and 1946.

Today, the Carmen hyperlux grand tourer is designed, developed and manufactured in Barcelona. The handcrafted Carmen is based on a super-stiff, hand-laid carbon fibre monocoque, which provides the foundation for the car’s exceptional luxury, comfort, and attention to detail.

Development and build of the Carmen and its custom-designed electric powertrain is led by the company’s production partner, QEV Technologies. Also based in Barcelona, the team of highly-skilled engineers at QEV Technologies boasts experience across design, engineering, R&D and production for Formula E teams, supercar brands and mainstream car manufacturers.