Home Launch Pad Slick new Opel Astra is Anything but a Drag! 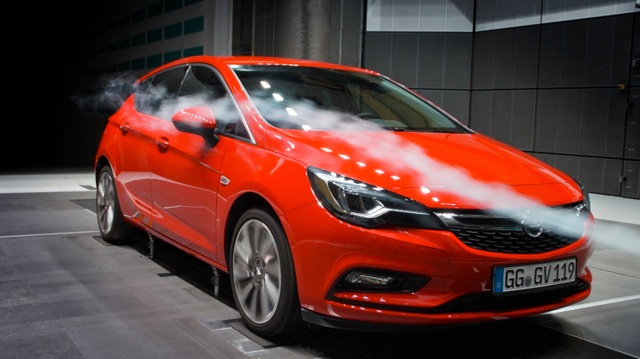 Over 30 years ago in 1984, Opel launched the Kadett E GSi, which at the time became the most streamlined hatchback car in the world with its impressive cd value of 0.30. The Kadett E went onto become a sensation across Europe selling a total of 3,779,289 cars in its lifetime and in turn became a bestseller for Opel. Its success was due to its incredible efficiency and today the Astra carries this tradition, as it sets standards in aerodynamics with its lightweight vehicle architecture and design.

Clever design: more compact dimensions reduce drag
The New Astra is around 2.5 centimetres lower and 0.5 centimetres slimmer, made possible by the adaption of the roofline, C-pillar and construction of the underbody. But to make the vehicle as streamlined as possible, precision and attention to detail were also necessary. The engineers paid special attention to the roofline, the C-pillar and the construction of the underbody. The result speaks for itself: the new compact class Opel is amongst the elite of the most streamlined models in its class with a drag coefficient of 0.285.

“We have made the new Astra more aerodynamic than ever before” said Reiner Weidemann, Head of Opel’s Aerodynamics department. The tests done at the ultra-modern wind tunnel of Stuttgart University resulted in the new Astra being “the most streamlined compact class car ever produced by Opel.”

Design and vehicle architecture: setting standards in aerodynamics
Expressed in cold figures, the most eco-friendly version of the previous Astra had a drag coefficient of 0.325. The basic version of the new Astra has an outstanding drag coefficient of 0.285. Leaner, smarter and more innovative – the new Astra epitomises efficiency. Gains in fuel efficiency were achieved by several innovations to reduce drag such as letting the roof flow out gently to the back, the rear spoiler serving as an effective edge that cuts the airflow at the top and the C-pillar, with its small edges designed to split airflow more efficiently. Opel specifically decided not to look to a full underbody paneling. Instead, all parts were examined and reworked to ensure better airflow. The underside of the car now has airflow-optimised structures and battery attachment, the new rear axle now sits higher compared to the previous Astra, thus no longer providing an obstacle for the air flowing under the car. These measures all play a key part in the exemplary aerodynamics.

Double efficiency: improved aerodynamics meet latest generation engines
Combined with the fact that every new Astra will be propelled by an engine of the latest generation with engines ranging from 95hp to 150hp customers can look forward to a win-win-win situation. All of the new generation engines combine strong performance and economical fuel consumption with outstanding responsiveness while at the same time offering smoothness and low noise levels. For example, with the 1.0-litre turbo and Easytronic 3.0, the new Astra is the most fuel-efficient and eco-friendly petrol-engined car in its class (4.2 l/100 km in the combined cycle, 96 g CO2/km).