Home Launch Pad Solutions for the Cockpit of the Future 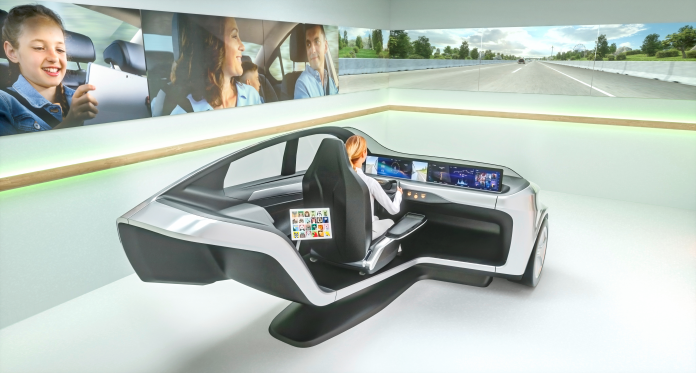 New tasks within the interaction between driver and vehicle are brought about by the three global trends of connectivity, automation and electrification. Hence, expanded requirements to the cockpit as core interface between human and machine need to be addressed in the individual elements of communication. Displays are particularly suited for this and need to be scalable in size and number for each model to meet the demands of car manufacturers and drivers.

Connected cars have the potential to turn the previous means of transport into a seamless mobile extension of the digital world of data and services. In a connected vehicle this trend has two main aspects. Firstly, connecting the car creates more data, more recent data, and thus more valuable data available to controlling the vehicle. This points towards safety and comfort by enabling earlier and better decision-making on the route and the actual longitudinal and lateral control – moreover, this applies irrespective of whether a human driver or an automation operates the car. Secondly, a connected vehicle offers its passengers full access to their customary services and data. However, it provides this in an automotive-appropriate way.

Automated vehicles (which will also be connected vehicles) offer more than a new type of functionality. They will also change the interaction between human and machine: once the driver can hand over the driving task to the machine, a new need for information arises. Ultimately, the trust in an automation needs to be established first, and the only way to achieve this is via transparency and communication. A driver will need to observe his/her vehicle while it is handling the situation and, in particular, the driver will want to be aware of what the vehicle is planning and doing. Only then will a driver develop trust in the capabilities of the automation. This also adds new requirements to the human-machine communication. One element of this is to know what the human behind the wheel is currently doing, where his/her attention is directed to, or whether the human is at all responsive. The appreciation of the automation and its usage will strongly depend on how the automation is perceived and how transparent its actions are. In this context, one should bear in mind that in the long run the subjective perception of the automation will be the only way to influence the degree of differentiation between systems. Once an automation works flawlessly, it is only the user experience which will dictate the appreciation of the system.

In future cars it will be increasingly important to offer the right choice of information – the immediate driving situation and traffic condition – on the right channel. This is because the range of functions keeps growing while the capability of the driver to perceive things does not. This is another reason why it is important to monitor the driver’s condition, to recognize signs of drowsiness, frustration (traffic jams) and aggression. Generally speaking, a modern cockpit needs to be able to adapt to the changing requirements of the driver and the passengers. This extends across all communication channels, including the acoustic and haptic channels. Still, the visual channel remains the most dominant. On the one hand, this is owed to the role visual perception plays within human “sensorics” in general. On the other hand, visual presentations are easily understood. Resultantly, the concepts discussed below are fully multi-modal, but they utilize the strengths of displays (and of augmentation) to meet the varying requirements of the driver and of the passengers.

As the generation of the “digital natives” begins to buy cars, there will be a growing number of vehicle users who naturally expect their mobility to be just as easy and convenient to use as their smartphone. This group of users approaches the car with a mix of expectations different to those of older users. During cockpit development it is therefore necessary to recognize the varying user requirements at an early stage and support them on the system. Thus Continental uses a persona approach in cockpit development, as this anticipates detailed requirements of specific groups. Various influencing factors, such as age, experience, openness to technology, health, and also daily routines (A day in the life of…) including daily chores serve as touchstone for the intended functionality. It is all part of a user-centered design process that works to ensure a balance between what a cockpit offers and what the target groups expect (functionality, perspicuity, usability, comfort). During this type of development, testing starts early to ensure that the emerging products have a high level of maturity. Following the “fail fast” principle, a product is vigorously tested to see whether it truly meets the needs of its prospective users. Subsequently, the specified functions are allocated to the best suited areas. Contrary to previous systems, the growing number and size of displays will cause the contents from one display to shift to another or extend it to others with a mere gesture (FIG. 1). During an automated driving period, a driver can of course watch a movie – traffic permitting. The classical and rigid separation of zones will thus be softened to a degree (FIG. 2).

For years now, displays have grown in number and size, also delivering better visual quality. It is this trend which paves the road for the above-mentioned concepts. Other factors, such as the wish for higher efficiency, also influence this trend. For example, replacing the outside rearview mirrors by cameras and displays to depict the “mirror” contents can improve fuel efficiency. This is especially true for commercial vehicles with large mirrors, which strongly benefit from digital mirrors. The effect also applies to passenger cars, however in this case the motivation to eliminate mirrors probably stems just as much from the wish to connect “mirror” contents with driver assistance functions, e.g., to highlight potential dangers.

In conclusion, one can assume that drivers and passengers will want to use the period of automated driving for activities unrelated to driving. Again, vehicle-integrated displays provide an excellent basis for this. The use of devices such as laptops pose a serious risk in a crash situation, because the position of the device needs to be considered to account for the activation of restraint systems. To this extent, built-in displays are more beneficial.

Clearly, the character of a cockpit and especially the number and size of displays will depend on the vehicle model and the requirements of the targeted future owners. The Integrated Cockpit System was designed as a generic suggestion of how potential challenges could be assessed and overcome with a fully digital cockpit. The actual scope of information which is depicted can of course be personalized to avoid overstraining or underutilizing the driver. Together with a camera to monitor and recognize the driver, the preferred method of presenting information can be activated autonomously for each individual driver.

The Integrated Cockpit System (InCoS) demonstrator is a premium information and control center solution with six full-screen displays (one of which offering touch control) under two cover glasses. The main intention is to facilitate a high level of adaptation to driving, traffic and user situations. Future connected (and/or automated) vehicles will introduce new use cases which have to be flexibly supported by the instrumentation depending on the driving mode and user request. Examples include an autonomous driving up of the vehicle, a welcoming of the passengers with a status report on available online connections and pre-calculated routes. During longer manual driving periods, automated driving (with online activities such as surfing the internet, interactive gaming, streaming), the process of returning the driving task to the driver, and supporting the arrival can be covered through changing and personalizing usage of individual display areas.

Thanks to the flexibility of displays plus the option to shift contents from one to another, core requirements of everything from vehicle control to cloud connectivity can be met. The principle of networking and flexibility, which is demonstrated by InCoS, can be scaled down with a reduced number of displays in line with the type of vehicle (FIG. 3).

New types of control elements, such as buttons “disappearing” behind a surface (morphing controls), contribute to a smooth and orderly cockpit impression with a low level of distraction while still making dedicated control elements available for fast access. As soon as a hand approaches the invisible control panel, the buttons move forward and are illuminated (FIG. 4). When the intended control action has been successfully performed, the button gives a haptic feedback to the finger. If the control action is completed, the buttons will disappear under the surface (FIG. 5). A plain, elegant and evenly curved surface replaces permanently visible control areas.

Graphical additions (augmentations) to the real world as seen by the driver, are an ideal way to guide the driver’s attention to a relevant area and make him/her understand immediately which driving task needs to be carried out (FIG. 6). It is the Augmented Reality Head-Up Display (AR-HUD) which makes this supplementation of the real world possible. Virtual navigation markings “on” the lane, for instance, make driving easier and contribute to safety. For automated driving the AR-HUD is also a beneficial element of interaction concepts: the AR-HUD can visualize what the car “sees” and plans by graphically highlighting detected objects and safe trajectories. This method of creating transparency is a precondition for the driver to build trust in the performance of his/her car. Thus, the driver will still have the psychologically important feeling of being in control because he/she will be aware of the car’s actions. Using holographic waveguides instead of mirrors works to project the augmentations. In the near future, the system’s spatial envelope will be considerably smaller so that applications in many vehicle segments are possible.

Cockpits for connected and/or automated, electrified vehicles must support a continuously increasing multitude of communication requirements for each situation and traffic condition. To do this, a cockpit requires a flexible and personalized visual element including suitable control elements. Augmentations serve as an extension of the cockpit “into” the road and help the driver to handle the driving task, or they build trust in an automation. Through networking and scalability of the displays, very capable solutions for different vehicle segments can be created.