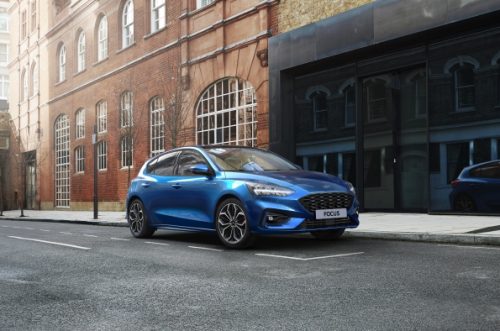 A new Focus Zetec Edition variant delivers standard specification to benefit business and private drivers including a wireless charging pad and navigation for the SYNC 3 voice-activated connectivity system with 8-inch touchscreen.3Front and Rear parking sensors and Powerfold mirrors are also fitted as standard.

“Our electrified powertrains are designed not just to save drivers money on fuel, but also to boost the fun-to-drive character of our vehicles,” said Roelant de Waard, vice president, Marketing, Sales & Service, Ford of Europe. “The Focus EcoBoost Hybrid seamlessly integrates electric and petrol power for efficiency and performance that would have seemed the stuff of dreams just a few years ago.”

Focus join Ford’s Puma, Kuga, and Fiesta passenger cars as well as Ford Transit and Transit Custom commercial vehicles in offering mild hybrid technology for enhanced fuel efficiency. Ford is committed to offering an electrified version of every passenger vehicle it brings to market in Europe and will grow its range of electrified vehicles in Europe to 18 on sale before the end of 2021, including mild hybrid, full hybrid, plug-in hybrid and battery electric vehicles.

Locating the 48-volt battery beneath the front passenger seats has allowed the mild hybrid powertrain to be integrated with no loss of cargo or passenger space for Focus customers.

The BISG also acts as a motor, integrating with the engine and using the stored energy to provide torque assistance during normal driving and acceleration, as well as running the vehicle’s electrical ancillaries.

The intelligent, self-regulating mild-hybrid system continuously monitors how the vehicle is being used to determine when and how intensively to charge the battery for optimal benefit, and when to utilise the stored battery charge using one of two strategies:

The more powerful BISG enables the Focus EcoBoost Hybrid’s Auto Start-Stop technology to operate in a wider range of scenarios for even greater fuel savings. Able to restart the engine in just 350 milliseconds, Stop-in-Gear functionality can switch off the engine when coasting to a stop even when the vehicle is in gear with the clutch pedal depressed, and can be adjusted to activate from 9 mph, 12 mph, or 16 mph.

Cylinder deactivation further enhances fuel efficiency by automatically switching off one of the cylinders when full capacity is not needed, such as when coasting or cruising with light demand on the engine. The system can disengage or re-engage one cylinder in 14 milliseconds with no compromise in performance or refinement.