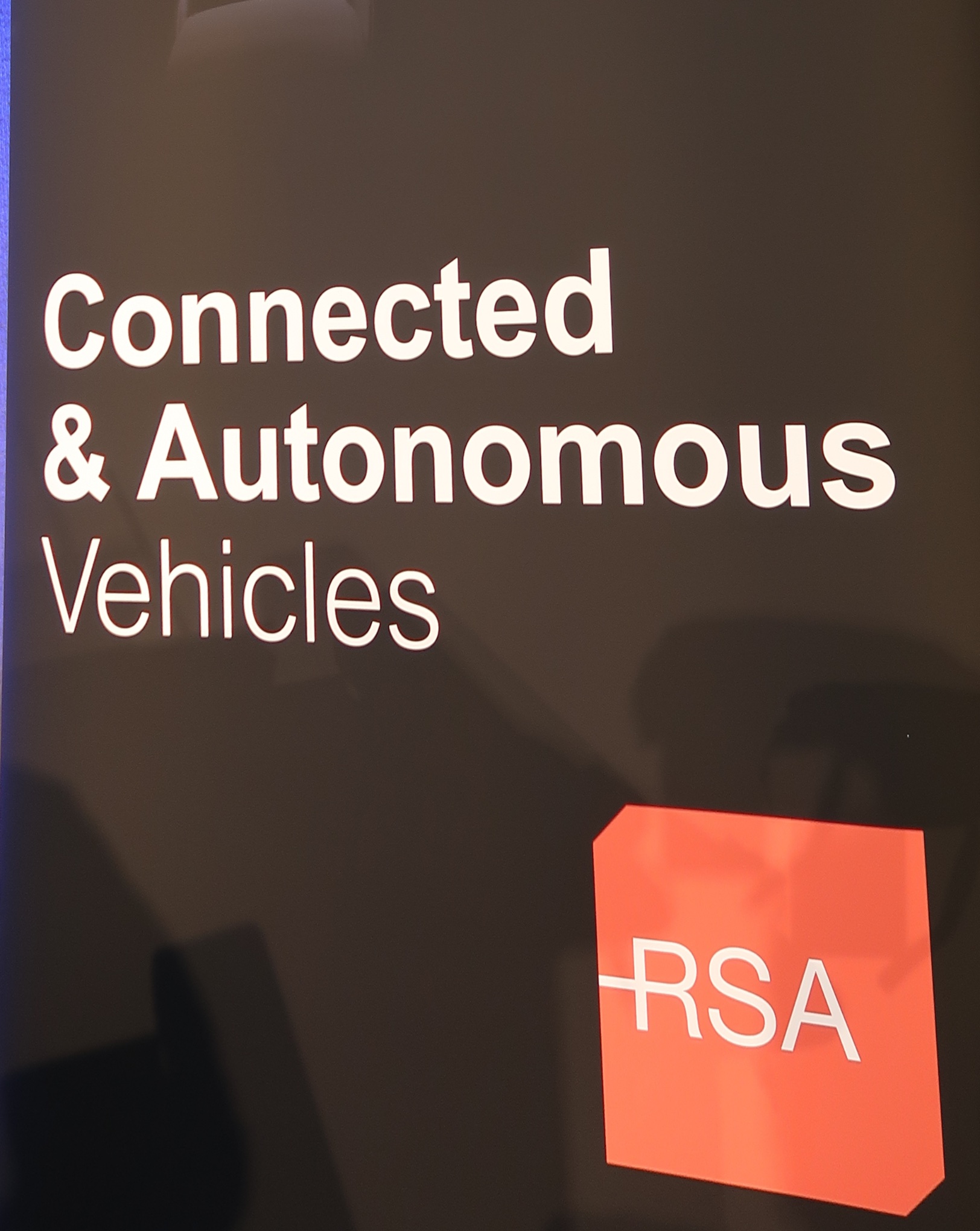 Attendees at the Road Safety Authority’s (RSA) recent Road Safety Conference in Dublin Castle, which this year had as its theme ‘Connected and Autonomous Vehicles (CAVs)’ are likely to have been encouraged and discouraged in equal parts on the future prospects for self-driving cars.

While there was overall consensus around the fact that autonomous vehicles will happen, with development  inexorably moving forward, on the other hand there’s a realisation that there are significant obstacles and challenges to overcome from legal, logistical, administrative and technological perspectives.

Thirteen years is the average time that respondents to a survey on autonomous driving felt it would be before self-driving becomes a mainstream reality. That study, presented by John O’Mahony, Director, Behaviour & Attitudes into Irish attitudes towards autonomous vehicles revealed significant disparities in opinions depending on age, with perhaps unsurprisingly younger drivers being much more accepting of and interested in self-driving cars than older people.

The survey, which incorporated replies from over 1000 respondents, revealed that nearly three quarters of those surveyed were aware of autonomous driving, with 40% agreeing that self-driving cars are a good idea. However of those over 50, only 30% replied in the affirmative, while 54% of those under 24 were positive.

Asked about interest in owning an autonomous car 27% were either extremely or very interested,  which John pointed out equates to a 1/2 million potential customers. Again age was a determining factor, with 41% of under 24s interested versus just 19% of over 50s. Interestingly when asked what were the perceived benefits or concerns over self-driving cars, safety was cited as was the deciding factor for both those open to and opposed to the technology, with those in favour believing it would lead to less road fatalities, while those opposed said the potential danger especially for vulnerable road users was high.

Overall only 35% of respondents agreed or strongly agreed with the statement ‘I would trust a a self-driven car to bring me home safely’, a figure John said needed to change if self-driving cars are to become a reality. 55% of under 24s were positive, versus only 23% of those over 50.

For self-driving cars to become a reality will require a huge amount of infrastructural, legal and administrative changes to the current structure. John McCarthy, Principal Officer, Department of Transport, Tourism and Sport acknowledged that Ireland currently is not as well set up and not as well connected and coordinated as a country as we could be. He said the Department was working on scoping out where we are at and where we are going, and that we will hear about that in the next while.

Looking at the safety potential and challenges for CAVs, Dr. Oliver Carsten, Professor of Transport Safety at University of Leeds noted that compliance with the three big risk factors of speeding, alcohol and seatbelt wearing would bring major benefits – in the case of non-overridable Intelligent Speed Adaptation (ISA) where the vehicle will always comply with the speed limit he said it could half the amount of fatal road crashes in the UK. Equally a quarter of all road deaths in Europe are alcohol related.

Fatigue is another major factor in fatal crashes, though Oliver also noted that humans will tend to be more sleepy in highly automated vehicles. The issue of driver distraction in highly automated vehicles is only a problem if we expect rapid human re-engagement, but that remains one of the major design challenges – to ensure the vehicle ‘knows’ the human is available to drive before handing back control. The vehicle and driver need to collaborate and to understand each other’s authority, capabilities and intentions, which is where the human machine interface (HMI) has a crucial role in communicating between the two, explained Oliver.

Dr. John McCarthy, Leader of for Intelligent Mobility, Digital Services Ireland, Arup, observed that the development of CAVs is a huge opportunity for Ireland. “To say there is no indigenous car industry is a red herring,” he noted, adding that our capability focus should be in a non-manufacturing capability. Estimating that the industry is conservatively worth €900 billion, he said that at the very least Ireland needs to be a fast follower in areas such as connectivity requirements and data management.

Describing the combined ACES (Autonomous, Connected, Electric, Shared) mobility platforms, Dr. McCarthy said that 2021 was a pivotal year for in EV/CAV deployment. “It’s critical to understand that autonomous vehicles are part of a larger picture, and that convergence with EVs must be taken into account.” Cyber security is also a concern, and there is a need for a robust framework to be developed to prevent CAVs from being attacked by hackers, he noted.

Dr Edward Jones, Senior Lecturer in Electrical & Electronic Engineering and Director Connaught Automotive Research (CAR) Group, NUI Galway presented on the tech behind the wheel – the cameras, infra-red cameras, radar, ultrasonics and lidar used to produce the data that allows the vehicle to drive autonomously. CAR’s primary objective is to develop technology for intelligent vehicles, through the application of state of the art techniques in signal processing, image processing, computer vision and machine learning. The interaction between the vehicle and driver remains critical, said Dr. Jones, adding that progress will be incremental, and while the technology currently wasn’t perfect, it is improving all the time. In the meantime though, expectations needed to be managed, he added.

Dr. Charles Johnson, Technical Director, CAS outlined some of the infrastructure implications of AVs and CAVs. For self-driving to become a reality, internal vehicle technology such as cameras, lasers, radar and telematics needs to be able to interact with external technology including connected vehicles, GPS, communications beacons and telecoms and internet, as well as with traditional technology such as road signs, signals and messaging. The vehicle has to be able to identity and adapt to changing scenarios such as water flooding or items on the road for example.  There will be implications for driving training and testing, having operators instead of drivers, and safety of occupants. “Universal, fully self-driving vehicles may be a long way off and restricted to off-road networks short-term. Progress towards this goal will be constrained by the available infrastructure. Sophisticated driver assistance is more likely in the short term,” concluded Dr. Johnson.

Dr Andrew Morris, Professor of Human Factors in Transport Safety, Loughborough University asked the question:- ‘Can we trust autonomous vehicles?’. Making the point that the technology is very new in the overall history of the automobile, he identified some of the main issues associated with autonomous vehicles to include safety, user trust, acceptance, ethics and legal issues, and hacking appeal as well as communication. A survey of 4,000 drivers in 2017 found that less than a quarter would feel safe or very safe in a self-driving car, though Dr. Morris pointed to a similar reluctance to embrace air travel, whereas today most people accept that it as normal to carry on working using wifi when flying.

Dr. Morris outlined the findings of a Loughborough study in association with Nottingham University into driver behaviours in a highly automated driving environment when the driver’s role shifts from driving to monitoring the system to resuming control during an emergency event. When an ‘unexpected event was introduced during the automated driving phase, the study found that trust in the system, which had initially been low, but had risen a lot as the participant became used to it, went down significantly after the incident, but gradually rising again.

The study also noted that with current vehicle designs, people will struggle at times to find a comfortable posture in which to engage with their preferred activities, for instance people struggled to use iPads etc because of the steering wheel.

Dr Noah Goodall, Research Scientist, Virginia Transportation Research Council focused on the dilemma of making a decision of who or what to crash into in the event of a pending accident. Crashing safely can be complicated, depending on your definition of safety. It is hard to articulate what’s right, and difficult to define rules that apply across novel situations. “All driving creates risk, and decisions about how to measure and distribute that risk have ethical components,” he explained. He highlighted interesting scenarios, for example that if every car in heavy traffic were to leave enough distance to stop for an object, it would reduce capacity by 67%, down from 4108 to 1367 vehicles per lane per hour  – think of the impact that would have in congested cities. Which in turn raises interesting dilemmas about liability if a self-driving car is theoretically breaking a rule of the road.

Representing the motor industry was David Thomas, Managing Director, Volvo Car Ireland Ltd. Volvo of course made the famous declaration some years ago that by 2020 no one should be killed or seriously injured in a new Volvo car. The company is standing by its Volvo Vision 2020 statement, but Mr. Thomas stated autonomous drive will be necessary to achieve that. He said there were three pillars driving ‘Towards 2021 – Volvo’s first unsupervised AD car on the road, namely the human, the hardware and the software. The human side is being driven through projects like Drive Me, the world’s first large scale project for self-driving cars which started in Gothenburg in 2017 using real customers on real roads, while the hardware and software sides are being driven through partnerships with companies like Uber and Autoliv respectively.

In her concluding remarks Moyagh Murdock, Chief Executive of the Road Safety Authority, said: There appears to be relatively low expectations as to the potential for self-driving vehicles to improve road safety. I think we will see them on our roads much sooner than people currently realise. While some may say that we should be addressing issues such as potholes, road markings and signage before worrying about driverless cars, we must prepare for the inevitable arrival of autonomous vehicles by raising public awareness, identifying the necessary legislative changes, building capability on new roads and investing in technology infrastructure such as 5G.

“The automotive space is going through a transitional period which will shape the industry beyond recognition, but the changes may also have a significant impact on road safety and have the potential to save lives. As part of its efforts to save lives on Irish roads, the RSA will continue to work to educate all road users about cutting edge automotive developments and the impact, for better or for worse, these may have on road safety in the future.”