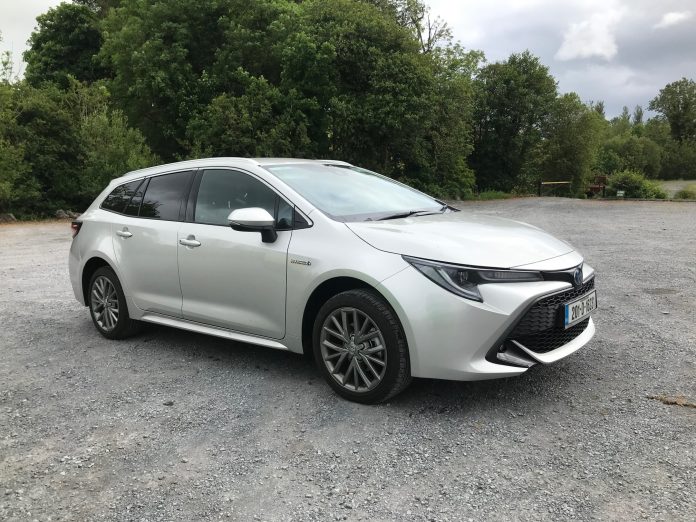 Since early childhood memories of being transported around in a station wagon still fondly remain, as does my affection for estate cars as they were also called until recent years. Now these elongated saloon cars have been redesignated Sport Tourers or Sport Wagons with the word ‘station’ no longer used (or stationed even!). Which is a pity as the term station was part of the car’s origins as they were primarily designed and made as load carriers or luggage carriers from railway stations.

Alas, unlike our European counterparts, estate cars are not so popular in Ireland as the majority of today’s motorists prefer SUVs. Which is a pity as many of the current Sports Tourers/Wagons are far more desirable and sleeker appearance that some of the Sport Utility Vehicles.

One such case in mind is the latest Toyota Corolla Touring Sports, which is part of Ireland’s best-selling car family and a petrol-electric hybrid at that. Featuring high levels of specification that we have now become to expect such as safety and electronic aids, to many however, the cars appearance and styling are just important. Proportionally spot-on, the contours of the car transcend from front to rear in appealing fashion. The 17” alloys set it off nicely too.

Inside, the 8” Toyota Touch multimedia screen dominates the dash area which incorporates a rear view camera and smartphone connectivity. Then there is a whole host of active and passive safety elements included in the Toyota Safety Sense II that covers pre-collision assistance items, speed assistance systems, lane keeping detection and auto light beams. All feature in the Sol spec level (test driven) which is powered by a self-charging 1.8 litre self-charging petrol-electric drivetrain that delivers 122hp and 142 Nms. Retailing at €32,205, this trim level has all one needs realistically when it comes to spec perks from the keyless entry, power retractable heated door mirrors, heated front seats, rain sensors, sat-nav etc. For the record, there are two other trim levels available: the entry Luna at €28,620 and the range topping Trek (€35,900), which has a number of distinctive and detailed enhancements (in addition to Sol) both regarding the exterior and interior design. There’s even a paddle shift for the auto gears!

A smooth almost silent drive in petrol mode glides the driver and passenger pleasantly to their destination and if and when required can go completely silent and emission free in electric mode. There is no issue about the ride and handling either but then again one would not be driving like former F1 driver Fernando Alonso (who now by the way also drives the Toyota Gazoo Racing Hilux in the Dakar Rally). Seamless too is the CVT automotive gearbox.

Needless to say the quality build is second to none. While the Skoda Octavia and Volkswagen Golf estates may have a bigger load space, there is almost 600 litres in the Corolla TS and that’s with having a battery pack underneath the floor. If not covering big mileage the Corolla hybrid is an economical alternative to diesel.  Take the estimated fuel economy return of 5.01 litre/100 km (COVID-19 restrictions prevented a lengthy test run) and with its low emissions levels i.e., NOx at 3.0 mg/km, the overall carbon footprint is significantly lower than most too.

BTW, I went on to own two estate cars over the years, one German and the other Italian. Suppose it’s time to consider returning to the ‘station wagon’ again someday soon!