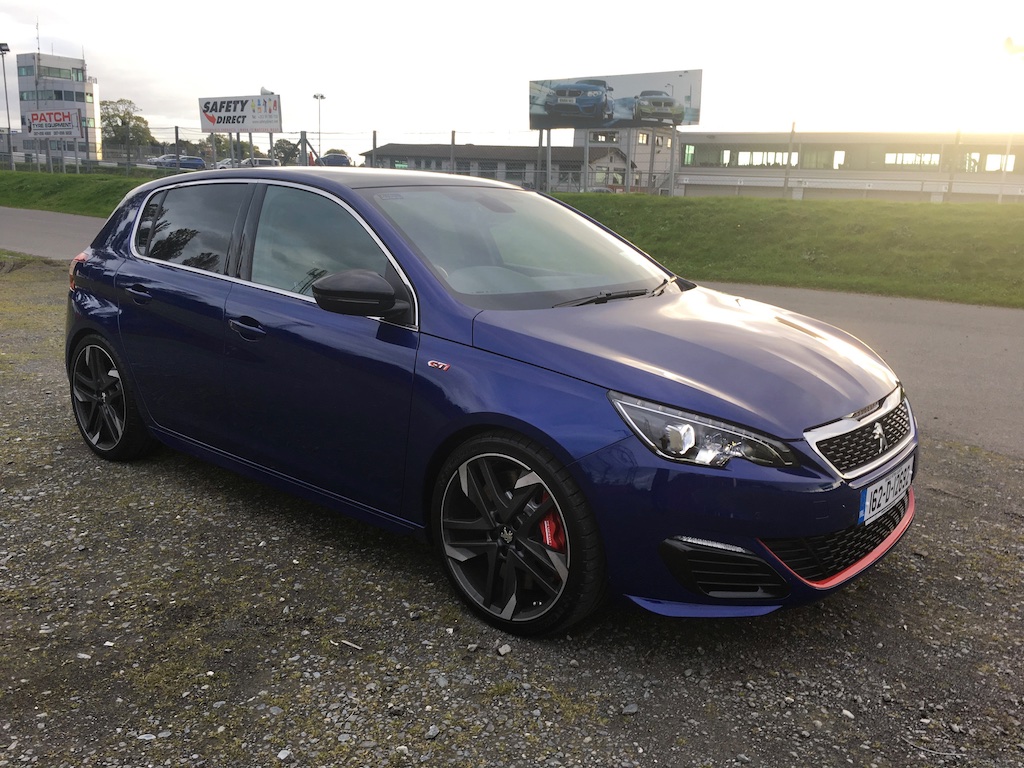 GTi might be most closely associated with the Volkswagen Golf, but over the years Peugeot has also had its share of desirable hot hatches bearing the Grand Touring Injection labelling.

None more so than the 205 GTi from the eighties and nineties, probably the Peugeot most will associate with hot hatchery. However, the 205’s big brother from the same era, the 309 GTi was arguably a better all-round car, less prone to the twitchy behaviour of the 205 that could (and often did) result in sudden snap oversteer. It was just as quick and agile to drive, with a highly regarded chassis offering excellent ride and handling. A GTi for grown-ups you might say.

Fast forward nigh on thirty years, and we have the 308 GTi, the spiritual successor to the 309 GTi (and later equally enjoyable 306 GTi-6). Can it offer the same affordable but fun motoring in a sensible package as its illustrious predecessors? Compare the specifications and straight away it becomes apparent that although only one number separates the 308 GTi from the 309 GTi, the hot hatch world has changed hugely in thirty years.

Take for instance the power coming through the front wheels. The 309 GTi pushed out 130 bhp from its 1.9 litre engine, a highly respectable figure by the standards of the day that accelerated the car from standstill to 100 km/h in 8.3 seconds, thanks in no small part to a kerb weight of just 985 kgs.

In comparison the 308 GTi tested here is over twice as powerful, developing an impressive 270 bhp from a smaller capacity 1.6 litre unit, but weighing 215 kgs more, giving a 0-100 km/h of six seconds (Peugeot also offers a less powerful 250 bhp version). In fact of its main front wheel drive rivals, all come with bigger displacement engines, and only the Seat Leon Cupra (290 bhp) or the significantly more expensive Honda Civic Type R (310 bhp) offer more power through those front wheels.

Then there’s the spec. A leather steering wheel was considered a desirable fitment on the eighties car, while the likes of central locking and electric windows were optional extras. By comparison the 308 GTi features everything from full LED headlights to leather effect and half alcantara bucket seats that massage you as you drive. Plus a whole lot more equipment besides. Ultimately though, hot hatches live and die by the driving experience, and whether we remember the 308 GTi fondly in thirty years time will come down to the fun factor behind the wheel.

Visually it hits the mark. The latest generation of the 308 is a stylish car in itself, and the GTi, sitting 11mm lower, and complete with 19-inch alloys revealing red brake callipers, unique front radiator grille, twin exhaust pipes and sublet GTi badging looks suitably – but subtly – sporty. A flat-bottomed GTi emblazoned small steering wheel with red ‘straight ahead’ indicator, body hugging sports seats, and lots of red stitching mark the GTi out from lesser models, as do the aluminium pedals and GTi door sills and floor mats. On the practical front, the five door only 308 GTi is well equipped as an everyday family car, with decent rear passenger room and a practical boot. As per regular 308s the minimalist layout up front looks well, but I remain unconvinced by the logic of having so many of the car’s functions channeled through the touchscreen system – it requires you taking your eyes off the road far too much. There’s a pleasing if muted thrum from the 1.6 litre THP engine that fires up via a centre console mounted Start button. If you do want more aural feedback, a Sport button on the central console gives the engine a more growly noise as well as changing the accelerator pedal mapping (and lighting the display console up in red). Not very long ago 270 bhp would have been considered a crazy amount of power to feed though the front wheels, but it’s a testament to the 308’s chassis that it feels more than capable of handling all that and more. Put the foot down and it accelerates at a very rapid rate of knots, but it’s all very controllable, with hardly a hint of torque steer.

That’s at least partly down to a Torsen limited-slip differential on this 270bhp car that isn’t offered on the 250 bhp version. It does a good job keeping the 308 GTi firmly planted on tarmac, even on slippery corners where the inside wheel would normally go light and lose traction. The other nice thing about this engine is that although peak power is at 6,000 rpm, maximum torque of 330 Nm is at a diesel-like 1,900 rpm. That means that when you want to drive the GTi in a relaxed manner it will happily pull away from very low revs, meaning gear changes are kept to a minimum.

It’s also pretty frugal if you aren’t too heavy with the right foot. While I averaged 7.1 l/100km over the course of a week which included some reasonably enthusiastic driving, I was able to achieve as low as 6.3 l/100km (44.8mpg) on more sedate runs. That’s pretty impressive for a car of this type, while road tax of €280 is also class-leading.

The six-speed manual gearbox is a little long between throws to be regarded as truly sporty, and it’s possible to experience a bit of transmission shunt unless you’re reasonably decisive operating the clutch change from first to second gear.

Braking prowess from the 330mm / 268mm front / rear discs and the highly regarded  Michelin Pilot Super Sport tyres is prodigious, while the car grips tenaciously when cornering, even in the wet. The 308 GTi also handles less than smooth tarmac pretty well. Ride comfort is certainly on the firm side, but no more than other cars of this nature – I drove it back to back with a Volkswagen Golf R, generally regarded as one of the best handling hot hatches on the market (albeit with 4WD not a direct competitor to the Peugeot) and found the French car compared well in this regard.

There is though a caveat. Which is that for all its undoubted capability, the 308 GTi is just that little bit un-engaging to drive. Specifically there’s a lack of feedback from the steering that doesn’t truly let you feel what’s happening at the wheel in the way that say, the Ford Fiesta ST (probably the most fun to drive front wheel drive car on sale today) does….or indeed how the old 205 GTi and 309 GTi did back in the day.

That, to a certain extent is nit-picking. If you’re after a very rapid hot hatch that grips and goes to a very high standard, yet won’t cost a fortune to use as an everyday runaround, then this Peugeot ticks the boxes very nicely indeed. However if you define a truly great hot hatch as one that brings meaning to the phrase ‘driving by the seat of your pants’, a car that makes you seek out the next corner just for the sake of it, the 308 GTi will probably leave you wanting that little bit more. Maybe not a future classic but a very likeable high-performer nonetheless.