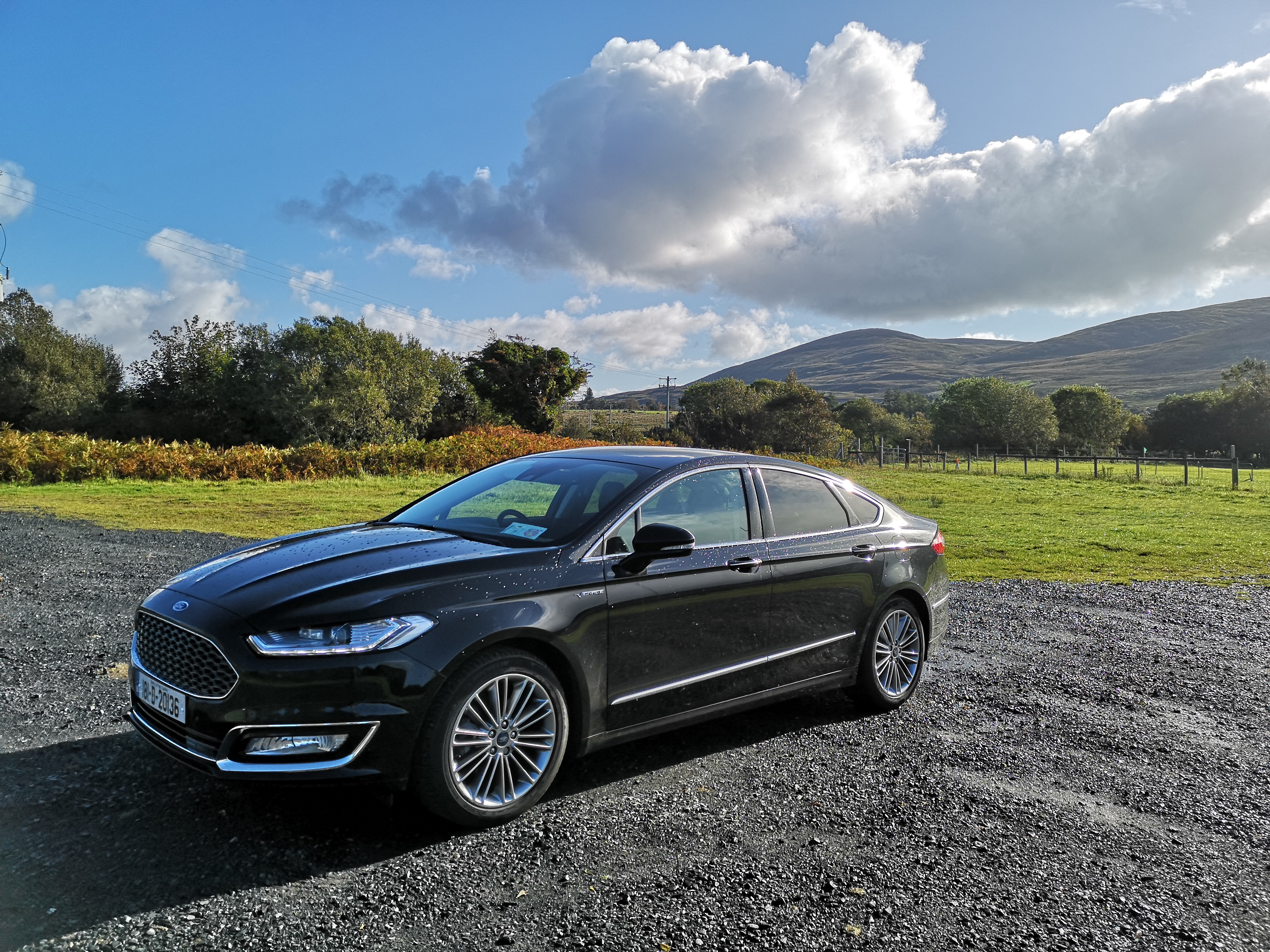 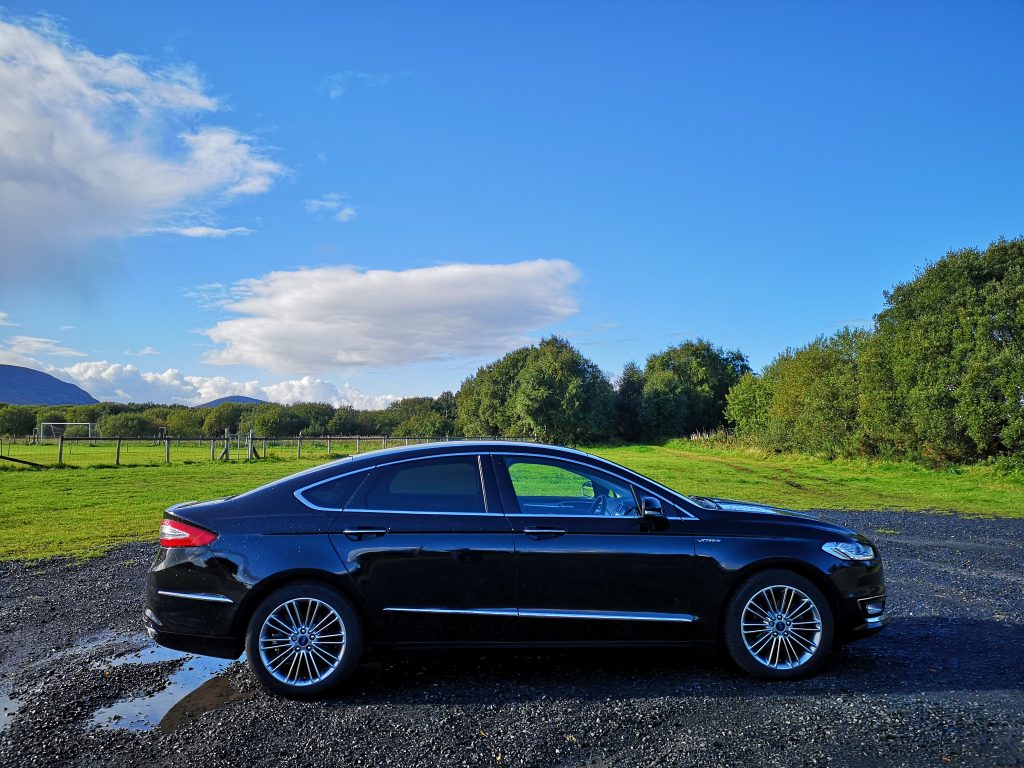 Funny how times change. Only a few short years ago, a large family car with an efficient diesel engine would have been on the top of virtually every fleet and private car buyers’ list.

Nowadays it seems manufacturers cannot give away traditional D-Segment contenders, while hardly a day goes by that doesn’t bring a fresh story about the death of diesel.

The Ford Mondeo epitomises the changing environment. For years it was one of Ireland’s best selling cars, but this year it ranks a lowly 34th in the sales chart. Though to put that further into perspective, it’s still the third best selling D-Segment car, with only the Volkswagen Passat and Skoda Superb of what can be considered its direct rivals having sold more units this year.

So the introduction of a hybrid version of the Mondeo is an interesting curveball into a shrinking ball park. Despite the proliferation of hybrid models in recent years, the D-Segment has been poorly facilitated in this respect so can the Mondeo HEV breathe fresh life into the sector? 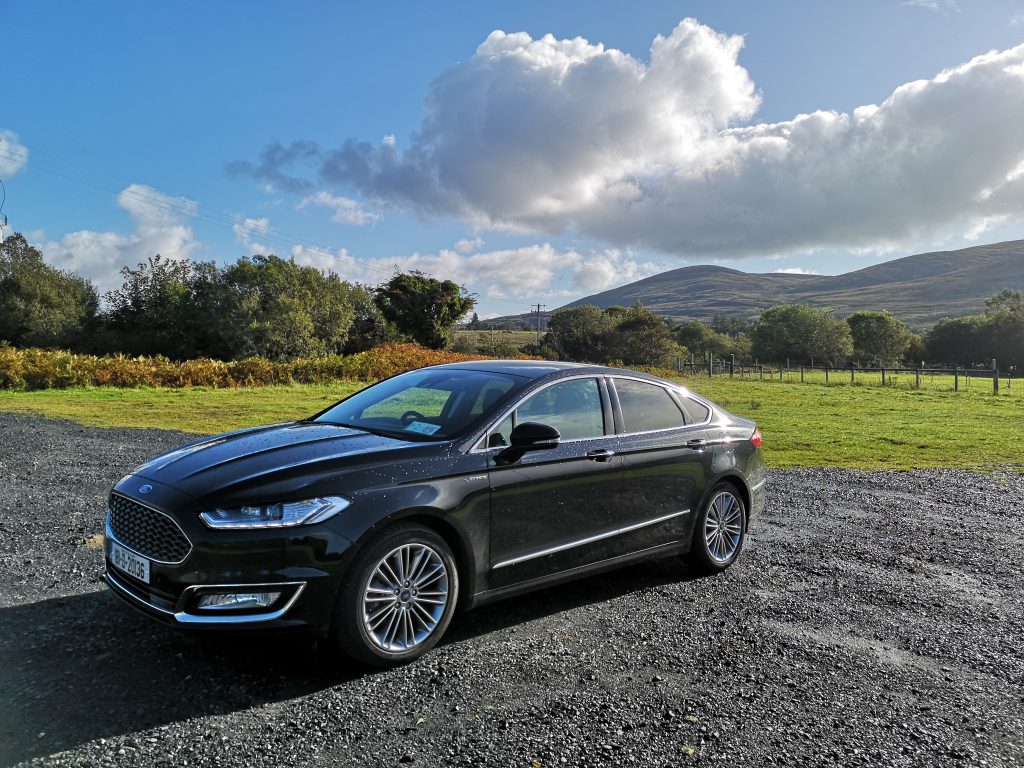 It may be new to Ireland but in fact the Mondeo Hybrid has been produced for over five years now, and is a significant volume seller in the US. It’s the first of many future hybrid and electric models – at the Paris Motor Show, Ford announced that an enhanced range of Ford Mondeo Hybrid petrol-electric vehicles will launch in Europe next year, including an estate variant

The first thing to notice is that this Mondeo is a little different in that it is a saloon whereas regular models come only in hatchback and estate versions.

That’s mainly down to the fact that the primary market for the Mondeo Hybrid has been America where saloons are king, but it also helps disguise the fact that the room needed to accommodate the batteries for the hybrid motor have seriously compromised the Mondeo’s legendary spaciousness. Whereas the 5-door hatch has a boot capacity of 541 litres, the HEV maxes out at 383 litres – and with a bulge in the floor where the batteries sit, it isn’t a particularly load friendly layout. 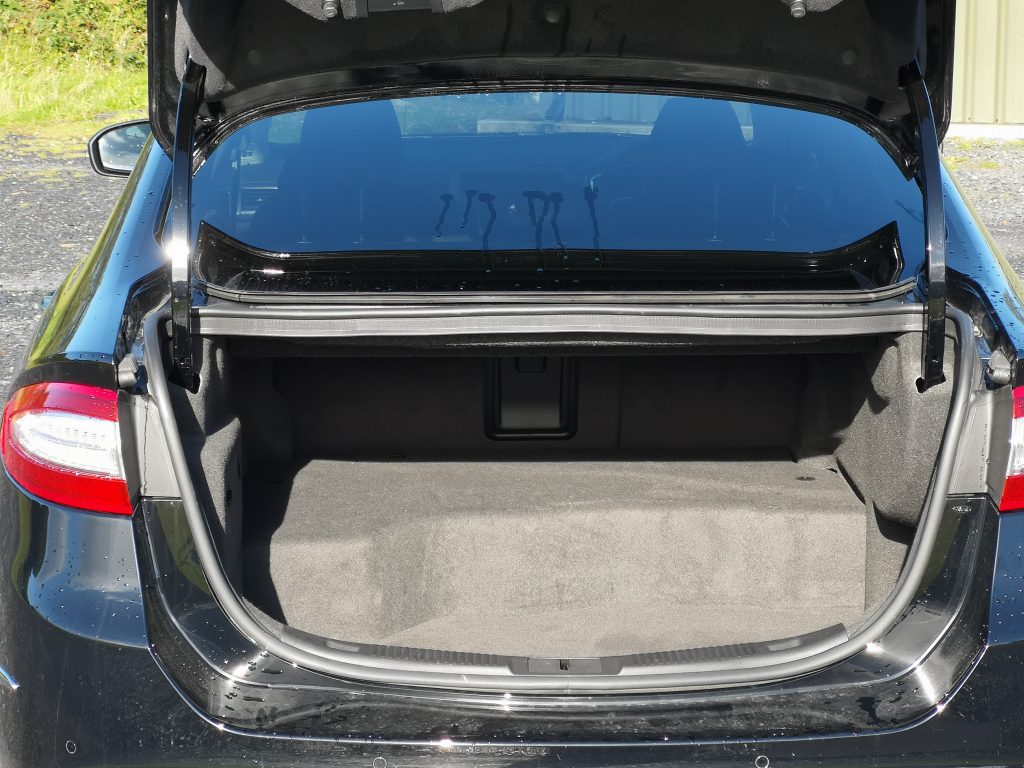 Boot space aside, the large Ford is still a spacious and comfortable vehicle with front and rear seat passengers generously accommodated for head and leg room.

There’s a special screen that displays the activities of the engine, electric motors and battery but otherwise the interior is pretty much standard Mondeo. Which in Vignale spec is rather plush, with pretty much every gadget and toy fitted that is on the market today.

The hybrid system itself consists of an Atkinson-cycle 2.0-litre petrol unit that’s pared to a boot-mounted 1.4kW battery pack. There are two electric motors – one to deliver drive to the front wheels while the second motor recharges the battery pack.

Total power when both petrol and electric motor are working adds up to a healthy sounding 187PS, but don’t be thinking this is a stealth performance Ford. There’s only 173 Nm of torque, and the continuously variable transmission (CVT) is not conducive to push-on driving. Keen drivers don’t tend to like these gearboxes due to the whining cacophony when you rev hard, but in fairness the unit in the Mondeo is one of the better versions of this type. Take it easy on the right foot and it’s pleasantly relaxed and refined.

The HEV differs from regular versions on the driving front in other ways too. The brakes feel a little strange due to the system changing between conventional disc braking and regenerative braking that recharges the battery, but you get used to the slightly spongy feel after a while. Overall the handling isn’t quite as sharp as you’d expect from a Mondeo, but for a keen driver it is still a more rewarding car to drive than your typical crossover. 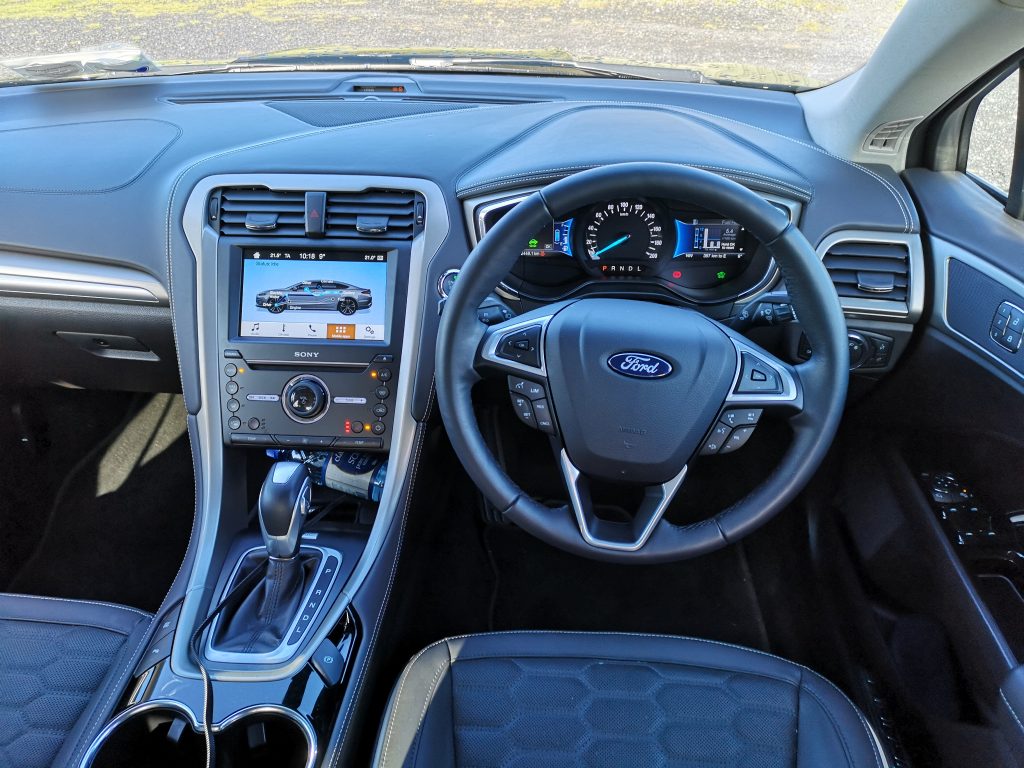 So does it make sense for a company car driver? Well first off there’s no VAT reclaim on petrol, possibly the single biggest factor keeping the fleet market firmly in the diesel camp. Otherwise the news is better. CO2 emissions of 99g/km keep the annual tax low, and in real world driving, fuel economy is about on par with what you’d expect from an equivalent diesel. We averaged 5.8l/100 km (40.5 mpg) over a week with the car, not nearly as good as the  official (NEDC measured) 3.8 l/100 km (61.9 mpg), but certainly better than would be achieved with a pure petrol engine.

The other point to note is that the Mondeo HEV does seem to be rather good value at present. Ford’s pricing strategy is sometimes a dark science with the official list prices often bearing no resemblance to what you will pay in the showroom, but our test car in Vignale trim can be bought for a tempting €36,305, while a slightly less specified Titanium model is offered at €32,420. These prices include the Government €1,500 VRT rebate as well as Ford’s current Clean Up discount.

Overall this is a car worth serious consideration as an alternative to a diesel. Whether you are concerned about the environment, have fears over being able to sell on your diesel in a few years’ time, or just want a very well specified car at decent money, the Mondeo HEV makes a strong case. 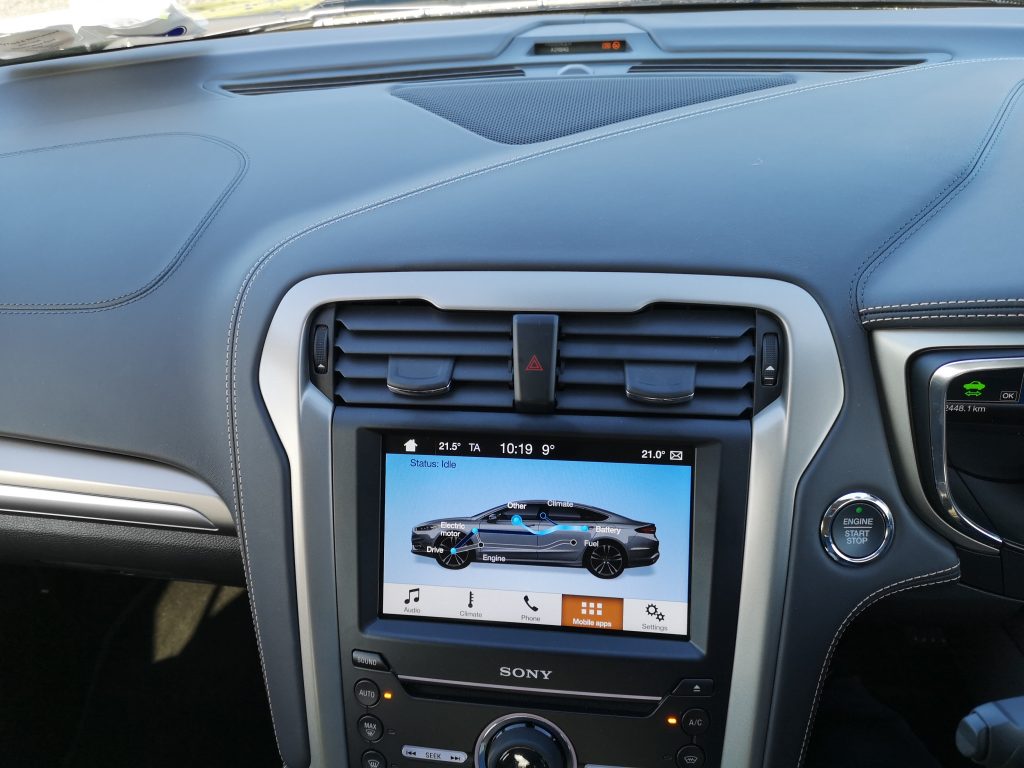